An annual event dedicating to the life and work of Lewis Debassige: 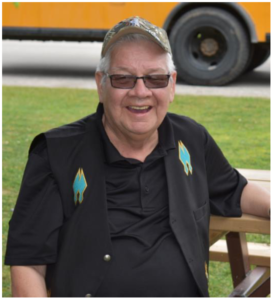 Since 2017, the History of Indigenous Peoples (HIP) Network has held an Annual Elder Event providing an opportunity to practice Indigenous Knowledge Systems within a university setting. By bringing an Indigenous Elder to campus, the Annual Elder Event has worked to break down the barriers between Indigenous and Western ways of learning and knowing. The event has created spaces at York University where Indigenous intellectual leadership can reach Canadian students and teachers through education and knowledge transformation. We are now honoured to name the series after its inaugural speaker, the late Lewis Debassige (1946-2019).

Lewis Debassige of M’Chigeeng First Nation on Manitoulin Island (Mnidoo Mnising) was a descendant of Gchi Ogaa and Niibaakhom, a proud Anishinaabe, a scholar, a warrior, an advocate, an activist, a teacher, and an Elder. Lewis, known as Luigi to his close friends, was a great man who lived his life to the fullest, making lasting contributions to all aspects of life for the Anishinaabek.

As a member of the Union of Ontario Indians and the National Indian Brotherhood in the 1960s and 70s, Lewis took part in the rise of Indigenous political organizing and activism. In 1969, Lewis was a part of the “magnificent seven” – a group of young Anishinaabe scholars who worked together to counter the White Paper Policy introduced by the federal government. This important work created the Red Paper Policy:
Citizens Plus – designed to protect the sovereignty and rights of the Indigenous People. In 1972, Lewis co-authored Indian Control of Indian Education, which played a foundational role in the development of Indigenous education policy in Canada. Lewis was a visionary and an influential Anishinaabe warrior with values rooted in the oral teachings of his grandfathers and great grandfathers.

Lewis was a founder of many institutions including the Ojibwe Cultural Foundation, Waubetek Business Development Corporation, and Kenjgewin Teg Educational Institute. Lecturing at many universities and colleges, Lewis’ counsel was sought by many leaders over the decades across Turtle Island. Lewis had a deep love for his community of M’Chigeeng, a deep love for his family and was a huge sports enthusiast. He was a former Band Councillor and a Director of Education for several First Nations. He has many nieces, nephews and cousins that he was very proud of and often shared stories of their successes from the past, the present and future hopes and dreams. Lewis was a huge support to many people across Turtle Island and was always willing to share his knowledge and wisdom every chance he got. His legacy will continue to live on through his lifetime work, his family, his students, his many friends and the Anishinabek community. In his final hours, he left with the following words: “Keep up the fight and I love you all”. 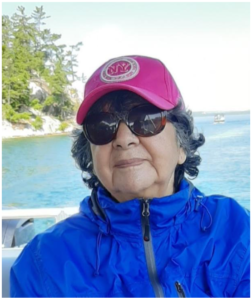 Marion McGregor has lived for over 60 years in a waterfront home overlooking McGregor Bay in the Whitefish River First Nation (Birch Island, Ontario). Her home was lovingly built by her late husband Murray Sr. at the start of their family. Marion has nine grown children all leading interesting lives and she is a grandmother and a great grandmother to much loved children.

In 1947, seven-year-old Marion's life comes crashing down as she was taken away from her family by train far away to a residential school - St Josephs girls’ school in Spanish, Ontario. For the next 10 years Marion lived a very rigid, structured, religious life in a big stone building surrounded by a wire fence. Punishment is readily administered if caught speaking the only language she knew if she talked about cultural practices. Fortunately, Marion is one of the few girls of her cohort to retain her mother tongue.

Despite her experiences at the Spanish Residential School, Marion obtained her Bachelor of Education degree with several specializations for Principal and Special Education. She was Principal and Teacher for over 30 years at Shawanosowe School in Birch Island. She has also been an active advocate for Indigenous education equality and often times protested education cuts.

Marion has received many awards for her years of service and volunteerism including the Lifetime Achievement Award from Anishinabek Nation, Woman of the Year from Noojmowin Teg Health Centre, and acknowledgements from Whitefish River First Nation for her volunteerism and years of service.

She is now a retired educator leading a busy life being involved in Elders’ Advisory Committees. Recently, she joined the traditional environmental knowledge activist elders’ group to stop herbicide poison spraying along hydro lines. She is very passionate about saving our forests and water, animal and plant life. Through the many Elder’s Advisory Committees that she sits on, Marion shares her knowledge and experiences and continues to advocate for Anishinabemowin, the environment, children in care, and her fellow seniors.

Since her retirement over 20 years ago, Marion has been asked to open meetings, conferences, or workshops in her mother tongue. Marion also has started her healing journey by entering a healing lodge, and also learning from medicine healers and other people about cultural practices in traditional values. Marion has own medicine bundle, built up from accumulated gifts.