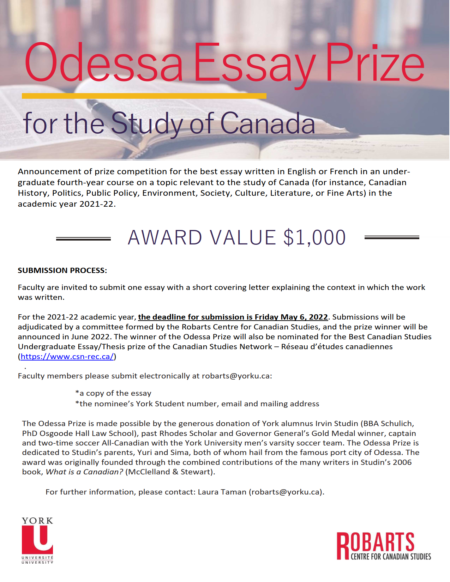 The $1000.00 Odessa Prize is awarded for the best essay written in English or French in an undergraduate fourth-year course on a topic relevant to the study of Canada (for instance, Canadian History, Politics, Public Policy, Environment, Society, Culture, Literature, or Fine Arts)

For the 2021-22 academic year, the deadline for submission is Friday May 6, 2022. Submissions will be adjudicated by a committee formed by the Robarts Centre for Canadian Studies, and the prize winner will be announced in June 2022. The winner of the Odessa Prize will also be nominated for the Best Canadian Studies Undergraduate Essay/Thesis prize of the Canadian Studies Network – Réseau d’études canadiennes (https://www.csn-rec.ca/)

*a short covering letter explaining the context in which the work was written
*a copy of the essay
*the nominee’s York Student number, email and mailing address

The Odessa Prize is made possible by the generous donation of York alumnus Irvin Studin (BBA Schulich, PhD Osgoode Hall Law School), past Rhodes Scholar and Governor General’s Gold Medal winner, captain and two-time soccer All-Canadian with the York University men’s varsity soccer team. The Odessa Prize is dedicated to Studin’s parents, Yuri and Sima, both of whom hail from the famous port city of Odessa. The award was originally founded through the combined contributions of the many writers in Studin’s 2006 book, What is a Canadian? (McClelland & Stewart).

2010-11: Lotoya Jackson (English), "Compromises of Success: Politics of Representation and Paratext in Lawrence Hill's The Book of Negroes