Co-sponsored by the History of Indigenous Peoples (HIP) Network 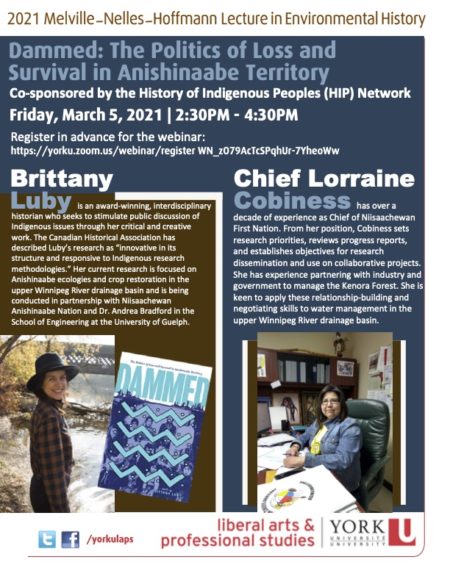 Register in advance for the webinar:
https://yorku.zoom.us/webinar/register/WN_zO79AcTcSPqhUr-7YheoWw

Brittany Chief Lorraine is an award-winning, interdisciplinary historian who seeks to stimulate public discussion of Indigenous issues through her critical and creative work. The Canadian Historical Association has described Luby’s research as “innovative in its structure and responsive to Indigenous research methodologies.” Her current research is focused on Anishinaabe ecologies and crop restoration in the upper Winnipeg River drainage basin and is being conducted in partnership with Niisaachewan Anishinaabe Nation and Dr. Andrea Bradford in the School of Engineering at the University of Guelph.

Dammed explores Canada’s hydroelectric boom in the Lake of the Woods area. It complicates narratives of increasing affluence in postwar Canada, revealing that the inverse was true for Indigenous communities along the Winnipeg River.

Dammed makes clear that hydroelectric generating stations were designed to serve settler populations. Governments and developers excluded the Anishinabeg from planning and operations and failed to consider how power production might influence the health and economy of their communities. By so doing, Canada and Ontario thwarted a future that aligned with the terms of treaty, a future in which 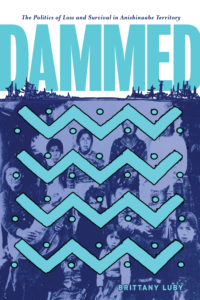 both settlers and the Anishinabeg might thrive in shared territories.

The same hydroelectric development that powered settler communities flooded manomin fields, washed away roads, and compromised fish populations. Anishinaabe families responded creatively to manage the government-sanctioned environmental change and survive the resulting economic loss. Luby reveals these responses to dam development, inviting readers to consider how resistance might be expressed by individuals and families, and across gendered and generational lines.

Luby weaves text, testimony, and experience together, grounding this historical work in the territory of her paternal ancestors, lands she calls home. With evidence drawn from archival material, oral history, and environmental observation, Dammed invites readers to confront Canadian colonialism in the twentieth century.

Chief Lorraine Cobiness has over a decade of experience as Chief of Niisaachewan First Nation. From her position, Cobiness sets research priorities, reviews progress reports, and establishes objectives for research dissemination and use on collaborative projects. She has experience partnering with industry and government to manage the Kenora Forest. She is keen to apply these relationship-building and negotiating skills to water management in the upper Winnipeg River drainage basin. 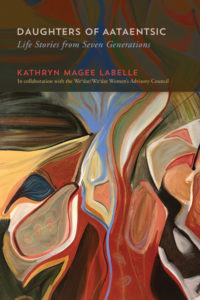 From the publisher's site:

Daughters of Aataentsic highlights and connects the unique lives of seven Wendat/Wandat women whose legacies are still felt today. Spanning the continent and the colonial borders of New France, British North America, Canada, and the United States, this book shows how Wendat people and place came together in Ontario, Quebec, Michigan, Ohio, Kansas, and Oklahoma, and how generations of activism became intimately tied with notions of family, community, motherwork, and legacy from the seventeenth to the twenty-first century. The lives of the seven women tell a story of individual and community triumph despite difficulties and great loss.

Kathryn Magee Labelle aims to decolonize the historical discipline by researching with Indigenous people rather than researching on them. It is a collaborative effort, guided by an advisory council of eight Wendat/Wandat women, reflecting the needs and desires of community members. Daughters of Aataentsic challenges colonial interpretations by demonstrating the centrality of women, past and present, to Wendat/Wandat culture and history. Labelle draws from institutional archives and published works, as well as from oral histories and private collections.

Breaking new ground in both historical narratives and community-guided research in North America, Daughters of Aataentsic offers an alternative narrative by considering the ways in which individual Wendat/Wandat women resisted colonialism, preserved their culture, and acted as matriarchs.