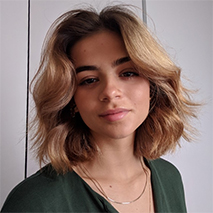 Natalia Santilli was awarded the Robarts Centre’s 2019-2020 Odessa Prize for the best undergraduate paper in a 4th year course that advances our knowledge of Canada for her paper, “The Abject Horror of the Spanish Influenza in Canadian Theatre." Natalia has completed her Specialized Honours BA in English and will be returning to finish her Certificate in Technical and Professional Communication this fall.

Her paper, nominated by Professor Lee Frew for “Canadian Literature and the Great War (GL/EN 4642)” at Glendon College, was the unanimous choice by the selection committee to win the Odessa Prize. In their decision, they write that she “demonstrates a sophisticated understanding of Julia Kristeva's concept of abjection, as well as insightful readings of the plays Dancock's Dance by Guy Vanderhaeghe (2005) and Unity (1918) by Kevin Kerr (2014) in light of Kristeva's thinking. … This analysis demonstrates an exceptional understanding of both the theory and the plays: frankly, the essay is outstanding, graduate student-level work.”

We asked her to reflect on the process of researching and writing this paper and what the award means to her:

When Professor Frew first told me that he’d nominated my paper for the Odessa Prize, I was ecstatic just for that compliment alone. A few months passed and with COVID chaos swimming around my head, I very nearly forgot about the nomination (which was admittedly partially intentional, I’d made up a few consolatory excuses for myself as to why it’d be totally fine if I didn’t win). The email from Gabrielle Slowey [Director of the Robarts Centre] congratulating me for having won came as a huge surprise, and I re-read it an embarrassing number of times for it to sink in that such kind words of praise were written in reference to my work. I was elated, to say the very least.

I’m incredibly grateful to Irvin Studin for establishing the Odessa Prize, and I have to say that it came at an especially difficult time COVID-wise, which made it all the more significant. It hit me that I couldn’t imagine a better way to wrap up my degree, with my final English paper being awarded such a huge honour. It really did feel like the icing on the labour-intensive cake! I’d also like to highlight that I really owe my interest in Canadian Studies to Lee Frew, because it’s in taking his English courses every year as my absolute favourite professor that I was introduced to the field in the first place. The English department really won’t be the same without Lee.

Natalia began work on the paper in March as the COVID-19 crisis was intensifying around the world. Today she is still reflecting on the way her work is helping her understand the situation we all find ourselves in today:

I continue to think about my paper’s focus on the various ways in which people (or characters) cope with horrific circumstances, for better for worse. Lately I’ve been specifically thinking of this in terms of “COVID hoaxers” who, whether consciously or not, seem to use denial as what we might call a (terribly dangerous) coping mechanism. I can’t help but look at this through a Kristevan lens as I do in my paper, because I’d argue that this denial of horror is essentially a refusal to engage with the “abject” for its reminder of our mortality. The irony here is that Julia Kristeva’s theory of abjection demonstrates that the abject to be a powerful and crucial form of protection. To reel myself back in here, my simple conclusion is an obvious one that we see playing out in real-time today: engagement with the abject/horror of the pandemic means you may be terrified, but you’re better protected; whereas its opposite leads to the under-protection of yourself and everyone around you. The takeaway is that fear may be unpleasant, but it can absolutely be harnessed for productive means. This is why even as things start to feel more “normal”, Kristeva would wag an admonishing finger at anyone who didn’t don a mask to brave the outdoors, and I’d side with her.

And finally, we asked Natalia about her future plans:

I’ll be returning to Glendon in September to finish up my certificate in Communications. I’m also the project manager at Lunik, our student-run Cooperative on campus. As for what I’d like to do in the future academically-speaking, that really is the million-dollar question! My exhausted student answer would be “nothing!!”, but I entered into my BA with the hopes of one day becoming an English professor and I still entertain that idea. For now, though, my plan is to teach English in Korea for a couple of years after I graduate (I know, classic English major move, but I’m so excited), and then to re-evaluate if I’d like to get back in the saddle and do a Masters (very likely in Canadian Studies) once I return home to Canada.